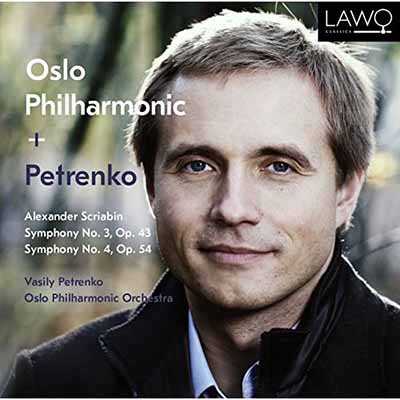 Vasily Petrenko and Oslo Philharmonic launch the first instalment in complete cycle of Scriabin symphonies. The new album marks the start of a creative partnership between the Oslo Philharmonic and LAWO Classics.

Petrenko notes “At first the orchestra was a little unsure about his [Scriabin] music, but they worked very hard on the Symphony No.3 and the ‘Poem of Ecstasy’ and are now big enthusiasts for Scriabin.”

“Petrenko’s debut disc with his new Oslo band should not be overlooked: Scriabin’s virtuosic writing holds no terrors for them, and they wallow in the “Voluptés” of No 3’s central movement with ravishing transparency. The Poem of Ecstasy is heady stuff, brilliantly played.” – The Sunday Times

“The performances, although recorded in a rather muddy acoustic, have the lean vigour we’ve come to expect of Petrenko from his work with the Russian repertoire at the Royal Liverpool Philharmonic. Not all of the The Divine Poem is divine — scored for enormous forces, it’s prone to flabby repetition — but Petrenko and his Norwegian orchestra don’t make the mistake of driving it too hard.” – The Times

“It’s the first recording in the Oslo Philharmonic’s ongoing survey of Scriabin’s symphonies under the fiery baton of Vasily Petrenko, and together they give a gloriously opulent and fervent account [of No. 3]. There’s more mystery and wonderment in the accompanying Symphony No 4 Le Poème de l’extase. If ever a set of performances caught the weird, psychedelic world of Scriabin, it’s this one.” – The Scotsman

“[Petrenko] shows an excellent grasp of each symphony’s dramatic trajectory, and a broader than usual awareness of the creative legacy within which Scriabin worked” – BBC Music Magazine