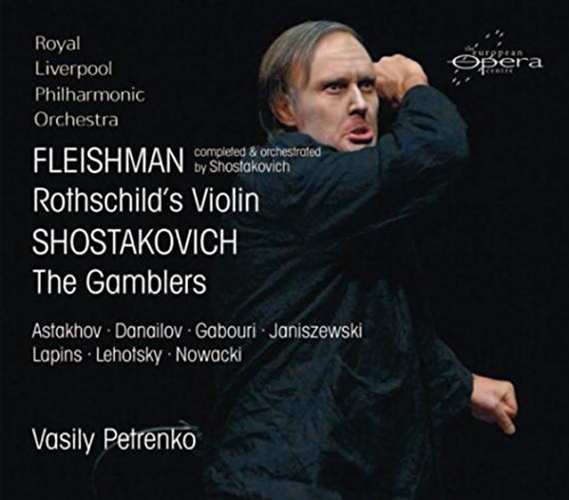 Vasily Petrenko is one of the most sought-after conductors of his generation, and in 2006 the Royal Liverpool Philharmonic Orchestra won the race to secure him as their Music Director. Among his many critically acclaimed performances since taking up the post is this thrilling Russian opera double bill, produced in conjunction with the Liverpool-based European Opera Centre. The resulting live recording is, appropriately, Petrenko’s debut on disc.

The links between these two operas and their creators is indelible. Whilst Shostakovich never finished The Gamblers, he was able to complete Rothschild’s Violin, the work of his student Veniamin Fleishman who was killed during combat at a tragically young age. Shostakovich’s gamble with Gogol’s unwieldy play didn’t quite pay off, and he never finished the work, no doubt spooked by the scathing political reaction to his earlier opera Lady Macbeth of Mtsensk. He turned out a tantalizing first act – but we’ll never know what he might have made of the full sprawling text. Fleishman began work on the Chekov-inspired Rothschild’s Violin when he was Shostakovich’s student and inherently evokes his teacher’s music. The elder was highly protective of his protégé’s only surviving composition, insisting that the score be sent to him when Fleishman went off to war. Upon the lad’s untimely death he felt compelled to seal his legacy by completing the work.

The cast of Russian and Eastern European singers clinches this recording’s superb credentials. Rothschild’s Violin is the only available version on the market, making the coupling unique.

“…a pair of genuine rarities in charismatic performances. That both renditions seem so authentic has much to do with the extraordinary pizzazz and commitment of the orchestral playing.” Gramophone Magazine, July 2007
X