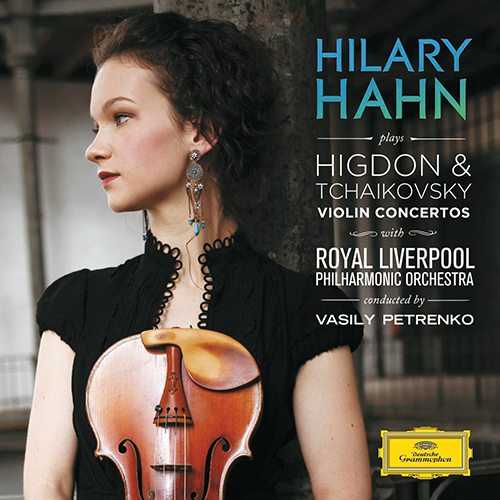 In another original concerto pairing, Grammy award winning violinist, Hilary Hahn, releases the world-premiere recording of Jennifer Higdon’s 2010 Pulitzer Prize winning concerto. Higdon’s masterpiece is stunningly paired with the ever popular, Tchaikovsky Violin Concerto, one of the most popular romantic violin concertos in the repertoire.

“While they come from different worlds, they share a great many qualities: lyrical delicacy, a brooding gentility, energetic abandon, and a fine maturity of spirit. Placed back to back, they suggest the range of musical possibilities open to the violin in the early twenty-first century.” Hilary Hahn

On this recording, Hahn teams up with the Royal Liverpool Philharmonic Orchestra under the direction of award winning young conductor, Vasily Petrenko. Hilary won a Grammy as “Best Instrumental Soloist Performance (with orchestra)” in 2009 and the Choc du Monde de la musique in 2008.

“Now there’s no need to cower behind the sofa. Higdon’s no ogre like Schoenberg…She’s an audience-friendly composer who almost writes tunes and orchestrates with great finesse…Yet there’s nothing lightweight about the piece’s technical demands…Ever dextrous, rhythmically alert, unwavering in pitch, Hahn survives them with ease.” The Times, 7th January 2011 ***

“[Hahn] plays [the Higdon] with such astonishing ease and assurance that its coruscatingly brilliant writing, especially during the whistle-stop ‘Fly Forward’ finale, appears to float effortlessly off the fingerboard…For sheer poise and control there are few recordings [of the Tchaikovsky] to match this.” Classic FM Magazine, March 2011 ****

“The Royal Liverpool Philharmonic rises to the demands of Higdon’s writing with ease…[Hahn’s] reading is technically and musically completely assured…Hahn’s account of the Tchaikovsky is a distinctly classical version, presenting the work uncut and without any of its traditional embellishments, privileging the work’s ‘pure’ structure over heart-on-sleeve histrionics.” International Record Review, March 2011

“Following [the first-movement theme’s] transformations is easy, thanks to Higdon’s exquisite ear for orchestral balance and the supremely violinistic solo part, played with consummate conviction and accuracy by Hahn…In both works Vasily Petrenko and the RLPO stick to Hahn like glue, a fact brilliantly revealed by the close, detailed recording.” BBC Music Magazine, March 2011 ****

“Tailor-made for Hilary Hahn’s cool, brilliant sound, Jennifer Higdon’s 2008 Violin Concerto has the swagger of an established favourite…There’s a strong Russian influence in the artless piccolo solo of the first movement and big-boned lyricism in the second. This is a vivid, well-crafted work, and Hahn is outstanding in Higdon’s quasi-Baroque laser-cut figurations.” The Independent on Sunday, 20th February 2011

“Hilary Hahn’s Tchaikovsky is no warhorse. Her tone remains unforced even in the most strenuous passages…Hahn’s more subtle way with Tchaikovsky’s melodies gives them a different kind of life, more integrated into the flow of the music…The performance of the [Higdon] concerto is splendid – confident and refined.” Gramophone Magazine, April 2011