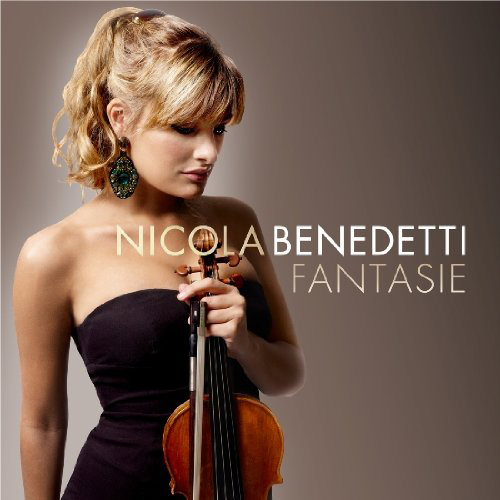 British violinist Nicola Benedetti presents her fourth album, Fantasie, a selection of well-loved violin pieces that form a stunning violin showcase. The repertoire is varied, ultimately all popular pieces and greatly different to the repertoire on her most recent discs. The combination of virtuosic, gipsy-influenced show stoppers with introspective meditations and songs represents the two aspects of violin-playing that particularly interest Benedetti, as well as showing her musical and technical development.

Upon winning the prestigious BBC Young Musician of the Year competition at the age of 16, Benedetti signed to Deutsche Grammophon and recorded the winning Szymanowski Concerto no. 1, gaining critical acclaim. The albums that followed contained world premiere works written especially for Benedetti by the pre-eminent British composers, James MacMillan and Sir John Tavener. She has established a fantastic career performing with major orchestras across the UK, US and Japan, garnering praise for her bold interpretations of concertos such as Tchaikovsky, Mendelssohn, Sibelius, Glazunov and Szymanowski.

For Fantasie Benedetti has put aside the concerti to explore some of the recital greats, including Vaughan Williams’ ‘The Lark Ascending’, one of the greatest works for violin which, for the last three years, has been voted Classic FM’s favourite piece of classical music in their Hall of Fame.

“The Lark Ascending is beautifully played, with pure, unforced tone, and in the unmeasured passages Benedetti imaginatively suggests the bird’s unfettered, unpredictable flight. By contrast, she produces an alluring, vibrant tone for the Méditation from Thaïs, and a similarly passionate approach animates several of the newly recorded tracks-the Rachmaninov and Fauré, particularly.” Gramophone Magazine, Awards Issue 2009

“Benedetti has the technique, passion and energy to compete with the best” The Observer, 6th September 2009