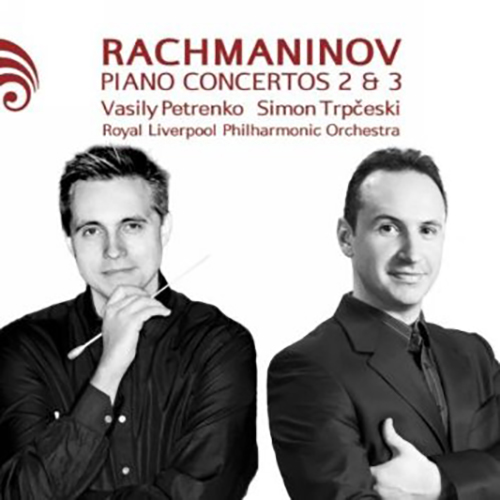 30-year-old Macedonian pianist Simon Trpceski is one of the most remarkable musicians of his generation. Here he performs technically flawless and superbly rendered versions of Rachmaninov’s notoriously challenging Piano Concertos Nos. 2 and 3. He partners with frequent collaborator Vasily Petrenko who, with the Royal Liverpool Philharmonic Orchestra, extend their fruitful Avie association with this, the first of two recordings with Trpceski surveying Rachmaninov’s complete concertante works for piano and orchestra.

Trpceski has performed extensively in the UK and has a loyal following amongst audiences of the London Symphony, Philharmonia, London Philharmonic, the Wigmore Hall and Southbank, and others. Winner of the London International Piano Competition in 2000, he was a member of the BBC New Generation scheme and winner of the Royal Philharmonic Society’s Young Artist Award in 2003. A Gramophone Award-winning artist, his first concerto recording will be eagerly sought out.

Since becoming Principal Conductor of the Royal Liverpool Philharmonic Orchestra in 2006, Petrenko has had a galvanising effect on Classic FM’s Orchestra in the Northwest. Multiple Gramophone Awards and unanimous critical acclaim have further spread their magical brand of music-making.

“Petrenko’s Rachmaninov is passionate yet strikingly unsentimental. This approach fits well with that of his soloist Simon Trpceski, whose playing of this most difficult of concertos combined impish nonchalance with great muscularity. Much of it was dazzling…Trpceski dispatched the first-movement cadenza with breathtaking panache.” The Guardian

“Both musicians are bursting with fire and seem joined at the hip in these accounts of Rachmaninov’s second and third piano concertos. Rhythmic momentum, glittering flourishes and plaintive musings: all the right boxes are ticked.” The Times, 6th March 2010 ***

“There is nothing overstated in these performances, and yet there is nothing that goes unnoticed either: the interpretative balance is precise and inspired, the thrill of experiencing the concertos played in this way immeasurable. Trpceski was born to perform this music, and Petrenko to conduct it.” The Telegraph, 5th March 2010 *****

“Both performances show an exemplary clarity and taste, a recreation, as it were, of musical utterances rather than virtuoso warhorses…The Second Concerto’s opening is naturally paced, neither perversely fast nor affectedly slow” Gramophone Magazine, April 2010

“A performance of integrity and imagination, and one that reveals unexpected subtleties in music that too often seems simply to tumble from climax to climax.” The Independent on Sunday, 18th April 2010

“Simon Trpceski and Vasily Petrenko present a completely integrated conception of each work…[they] know exactly when to push the musical argument forward and where it requires a bit more poise and reflection. The results are invariably compelling” BBC Music Magazine, June 2010 *****

“Trpceski’s playing combines dazzling brilliance with warmly natural phrasing with the natural ebb and flow so characteristic of the composer’s richly romantic melodic lines. Petrenko’s tempos are not dissimilar to Previn’s and his partnership with his soloist is all-embracing…Both works close thrillingly and the listener is left thoroughly satisfied.” Penguin Guide, 2011 edition