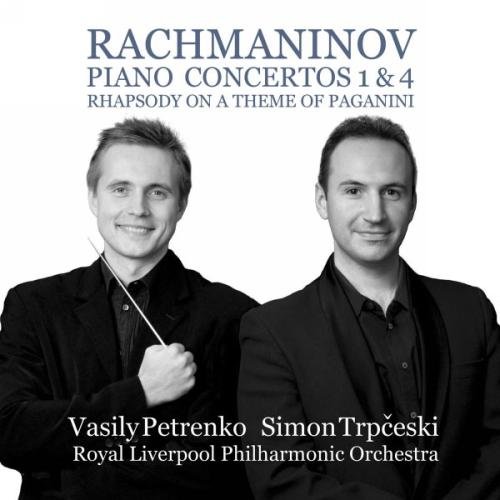 Simon Trpčeski’s recording of Rachmaninov’s Piano Concertos Nos. 2 and 3 was one of the most acclaimed and best-selling classical releases of 2010. His frequent collaborations with Vasily Petrenko and the Royal Liverpool Philharmonic Orchestra are justly celebrated. Together they complete the Rachmaninov canon with this highly-anticipated follow up of Concertos Nos. 1 and 4, and the Paganini Rhapsody.

Rachmaninov Concertos 2 and 3 made the Top 10 of Billboard’s Classical Chart and won a Diapason d’or de l’année. Simon Trpčeski will support the sequel with extensive touring and CD signings at which he regularly attracts hundreds of fans.

Rhapsody on a Theme of Paganini, Op. 43

“Simon Trpčeski, Vasily Petrenko and the RLPO bring understanding and instinct to their performances, and take to heart the different temperaments that each of the three works on this recording manifests…the judicious variety of touch and colour, and ability to reveal important details of the music, combine with an expressive maturity to make these performances utterly compelling.” The Telegraph, 16th June 2011 *****

“Trpčeski captures the music’s protean mood switches to perfection, his mercurial fingers dashing off the vivace flourishes of the outer movements and the most brilliant Paganini variations with insouciant bravura and brio…These performances are a meeting of dazzling musical minds, offering an untraditional approach that never sounds wilful, attention-seeking or eccentric.” Sunday Times, 3rd July 2011 *****

“Trpčeski relishes Rachmaninov, thrilling his audience with virtuosic passages which easily demonstrate why these pieces in particular were important vehicles for Rachmaninov the exiled pianist. Petrenko maintains timing and tension, whilst never allowing lush lyricism to become stodgy or overwhelming…this is a musical combination which works superbly.” Classic FM Magazine, August 2011 *****

“[Nos 1 & 4] have never been such sure-fire crowd-pleasers, but Trpčeski certainly plays them with fire and passion. No. 1 emerges as big-boned and compelling, while he plays up the leanly modernist aspects of No. 4…Trpčeski is aided throughout by the unanimity of feeling produced by Vassily Petrenko’s direction of the orchestra, conductor and pianist working hand in glove.” BBC Music Magazine, August 2011 ****

“Expectations are fully realised in performances of the highest order…Trpčeski was put on this earth to play this music and Petrenko to conduct it…This is a riveting disc, another major landmark for Trpčeski and one on which Rachmaninov finds interpreters thoroughly attuned to his emotional world.” Gramophone Magazine, September 2011