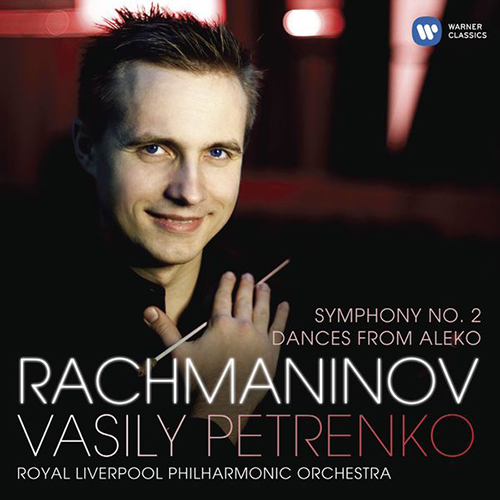 The second in this series of releases highlighting the Russian music of our conductor’s heritage. Vasily Petrenko conducts the RLPO for Rachmaninov’s much loved and best known symphony – No.2 in E minor. Also included are the Dances from Rachmaninov’s one act opera, “Aleko”, the work which effectively launched the young composer’s professional career.

Since Petrenko took up the baton of the RLPO’s Principal Conductor in 2006 (and then Chief Conductor in 2009), this partnership has flourished; and the orchestra is now considered Premier League.

“The RLPO can rarely have played with such rhythmic elan and tonal glamour than they do in this repertoire for their young Russian maestro, a Rachmaninovian to rank with the finest on disc…The scherzo and finale are played with exhilarating panache. Outstanding.” Sunday Times, 4th November 2012

“What a clever idea it was to launch this CD with the super-subtle Liverpool woodwind in the spotlight, lilting in the ‘Women’s Dance’ [from Aleko]…there’s a dash of bitters [in the Symphony] to leaven the sweetness and reveal what a lavish feast of counterpoint this epic work has to offer.” BBC Music Magazine, Christmas 2012 *****

“much to enjoy – the sonorous tuba entry a few minutes into the first movement’s Largo introduction, and the hair-raising climax in the Allegro moderato…Petrenko’s dynamic last movement is a success, though I would have welcomed a bit more indulgence in the closing minutes.” The Arts Desk, 24th November 2012

“Petrenko has instilled a sound that makes [the RLPO] a persuasive voice for the Russian Romantics. It is good to hear him devote so much interpretative attention to the Aleko extracts…But the chief attraction is the compelling interpretation of the Second Symphony…a performance that has a true feel for the organic manner in which the symphony is conceived.” Gramophone Magazine, December 2012

“Petrenko, generally speaking, appears to have the measure of this great work, but time and again he betrays his lack of control over the vast structure with a seeming inability to let the music move forward…[The Dances from Aleko are] far less demanding than the challenges of the Symphony, and Petrenko and the RLPO respond with delight to this rarely heard but eminently fresh and attractive music.” International Record Review, December 2012

“Petrenko’s reading of the Symphony is slowly but firmly paced and controlled. It unravels exquisitely, the lovely Adagio especially affecting. It never becomes mawkish but is full of tender nostalgia…The RLPO is on top form and the recording is extremely well engineered.” MusicWeb International, 8th November 2013