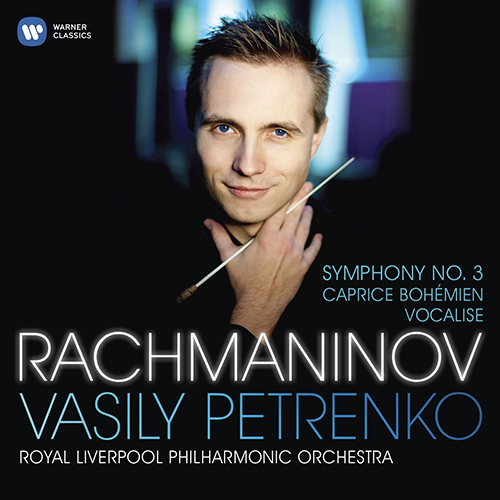 Award-winning conductor Vasily Petrenko’s exceptional abilities as a renowned, inspiring conductor with major media appeal set him apart from the majority of his contemporaries. He is the youngest ever Principal (now Chief) Conductor of the Royal Liverpool Philharmonic and will add the role of Chief Conductor of the Oslo Philharmonic beginning with the 2013/2014 season. His commitment to musical education has led him to act as Principal Conductor or the National Youth Orchestra of Great Britain and to be a founding member of the board of the UK’s “Building on Excellence: Orchestras for the 21st Century” scheme, which endeavours to increase the participation in classical and cultural events amongst British youth.

Vasily Petrenko conducts the RLPO for Rachmaninov’s third and most expressive symphony, paired with his capriccio on gypsy themes, the Caprice Bohémien.

This will be the first of a run of exciting releases focusing on the Russian music of Petrenko’s heritage.

“In the Third Symphony, which finds Rachmaninov wistfully recalling the Russia he left after the October Revolution, Petrenko and the RLPO also identify the zest, the orchestral lucidity and the rhythmic thrust that marked the composer’s later years. An exhilarating performance.” The Daily Telegraph, 5th January 2012 *****

“Perhaps the most impressive feature of this new recording is the quicksilver dynamic fluidity of the orchestra – they are able to move from the boldest of fortissimos to the most tender of pianissimos in a heartbeat. There is an overwhelming sense that the musicians are moving as one with the same telepathic unity of a murmuring of starlings. It is mesmerising….This music – and these recordings – will last for a very long time.” Classic FM Magazine, February 2012

“The RLPO strings sound leaner, perhaps, than those of Stokowski’s Philadelphia Orchestra, which inspired the composer, but they have never seemed more sumptuous than in the long melodies of the central adagio, and their brilliant articulation of virtuoso allegro passages at Petrenko’s fast tempi brings exhilarating dividends. In this magnificently played account, the stature of the music is never in doubt.” Sunday Times, 15th January 2012

“The RLPO play magnificently…There is surging energy here allied to lucidity of orchestration and rhythmic impetus, together with that infallible sense of instrumental timbre that Rachmaninov possessed. The lyrical elements…are conveyed with heartfelt affection without resorting to any heart-on-sleeve excess.” Gramophone Magazine, January 2012