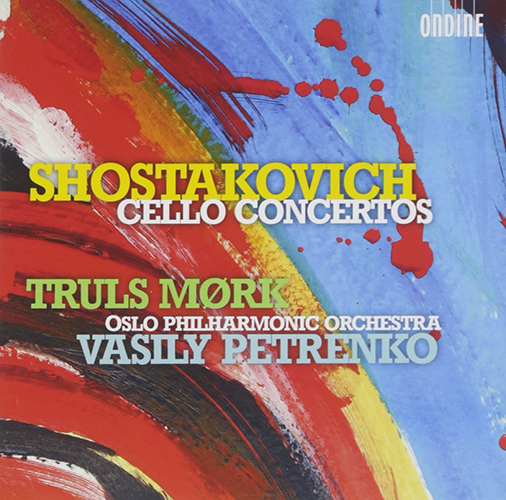 This is the premiere recording of the Oslo Philharmonic Orchestra under their new artistic director Vasily Petrenko.

Vasily Petrenko is renowned as a star conductor of the younger generation and one of the foremost interpreters of Shostakovich’s symphonies.

Truls Mørk is one of the most respected and prestigious cellists playing today, forged by a reputation of fierce intensity and grace in performances throughout the world. A committed performer of contemporary music, Mørk gave the UK premiere of Rautavaara’s cello concerto Towards the Horizon and whose recording on Ondine won both the Gramophone and ICMA Awards.

Shostakovich’s cello concertos were written for Mstislav Rostropovich during the 50s and 60s. Besides dashing virtuosity, the concertos also include substantial symphonic elements.

“Emotionally, these aren’t easy works to listen to, but Truls Mørk presents them with passion and conviction and it is hard not to be quickly drawn in. Vasily Petrenko finely judges the Oslo Philhamonic’s responses – both the undulating supporting material and the brutal assaults that cut through the music to such dramatic effect.” David Smith, Presto Classical, 28th April 2014

“the cleanness and accuracy of the orchestral playing bring out in more than usual detail the remarkable economy of the scoring [of the First Concerto]…Mork is more forthright at the opening of [the first movement] than many of his rivals, but his playing is high on emotional content.” International Record Review, May 2014

“there is little doubt that the present performance of the First Concerto is even more incisive than its predecessor…Petrenko draws out a wealth of fascinating detail from the orchestral accompaniment…The Second Concerto, on the other hand, doesn’t convince me to the same extent.” BBC Music Magazine, July 2014 *****