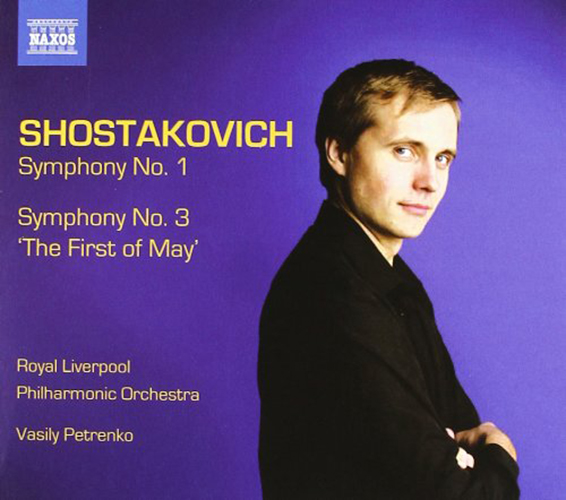 This is the fifth disc in Vasily Petrenko’s Shostakovich fantastic cycle, which is continuing to take critics by storm.

Shostakovich’s First Symphony propelled the teenage composer to international prominence, its emotional range and innovative orchestration marking him as a daring and precocious talent on the scene.

The Third Symphony, ‘The First of May’, originally intended as part of a symphonic cycle inspired by dates on the revolutionary calendar, has been described as ‘a reckless and at times chaotic accommodation between modernist intent and revolutionary fervour’.

Symphony No. 3 in E flat major, Op. 20 ‘The First of May’ with Royal Liverpool Philharmonic Choir

“This series… is developing into something really special. These RLPO Shostakovich recordings withstand comparisons with some of the greatest performances on disc.” Hugh Canning, The Sunday Times

“even more than on their previous Shostakovich discs, the playing is fabulously crisp and committed, while the interpretations combine atmosphere and a sense of proportion – much to the benefit of the youthful First, which receives an eerily effective performance, free of exaggeration.” Financial Times, 19th February 2011 *****

“How good to be reminded by this fine addition to Vasily Petrenko and the Liverpool Philharmonic’s lauded Shostakovich cycle of just what an achievement the First Symphony really was…Both symphonies are given fabulously vibrant — and beautifully recorded — performances here.” Sunday Times, 6th March 2011 ****

“Petrenko musters his forces superbly in both scores, harnessing the orchestral virtuosity that each of them demands, and lending the maligned Third a plausible raison d’être…Petrenko judges it expertly, knowing precisely when to put the foot down and increase the horsepower just as instinctively as he can allow the music to brood or manifest its strangeness.” The Telegraph, 18th March 2011 *****

“Few performances capture [the First’s] gawkiness as brilliantly as this new reading by Vasily Petrenko…[He] surely has the full measure of the music’s timbral transgressions…At the same time, Petrenko brings out the formal transgressions, too, sharpening the music’s breaks in continuity. Nor are the music’s emotional incongruities tamed…[The Third] is a musical maelstrom, and Petrenko charges into the swirl without trepidation.” International Record Review, April 2011

“Every young composer needs the sensitive skill of Vasily Petrenko to join the dots of fits-and-starts inspiration, and I’ve never been more convinced by the whole, rather than just the isolated gestures, of the teenage Shostakovich’s First Symphony. You hear more than ever how prophetic it is of things to come” BBC Music Magazine, May 2011 *****

“in the First Symphony, besides rapier-like flair and precision, there’s a reflective streak behind the passionate lyricism that beautifully brings out the music’s Tchaikovsky connection…This latest installment in Petrenko’s Shostakovich cycle with the RLPO more than maintains the superb standard they’ve set already.” Classic FM Magazine, July 2011 ****

“Petrenko and the Royal Liverpudlians give us as fine a performance of the Third as we are likely to hear, and if they can’t make something more loveable from this symphony, it’s not their fault. The conducting is thoughtful, but with the salt of spontaneity. The chorus is excellent, with good body and diction. The orchestra sparkles.” MusicWeb International, January 2012