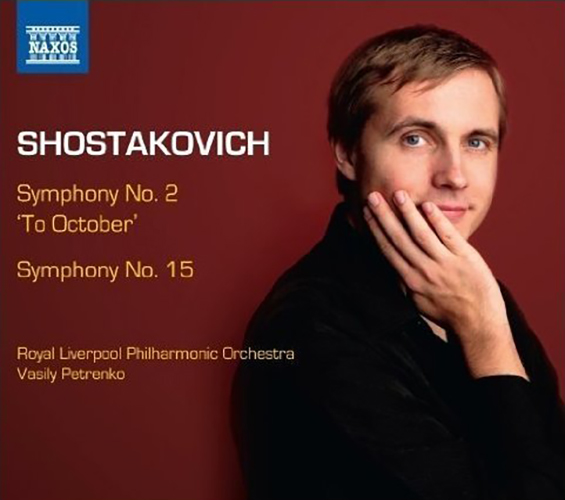 These two hugely contrasting symphonies come from the opposite ends of Shostakovich’s life and career. The Second Symphony was written to commemorate the 10th anniversary of the Bolshevik October Revolution. Its advanced idiom of experimental textures and abstract effects can perhaps be best described as organised musical chaos. The Fifteenth was Shostakovich’s last symphony and is filled with remarkable contrasts, from the rollicking quotes from Rossini’s William Tell Overture and eerie references to Wagner’s Götterdämmerung and Tristan und Isolde, to the last and perhaps most imaginative of the composer’s symphonic passacaglias.

Widely admired as having ‘superlative standards’ (BBC Music Magazine) and going ‘from strength to strength’ (Gramophone), Vasily Petrenko’s Royal Liverpool Philharmonic Shostakovich symphonic cycle has gained critical acclaim from every quarter, and each new release generates its own not inconsiderable gravitational field. Volume 7 cleverly pairs the ‘difficult’ but remarkably dramatic Second Symphony with the simultaneously rousing, enigmatic and emotionally draining Fifteenth in performances which once again set new standards.

Symphony No. 2 in B major, Op. 14 ‘To October’ with Royal Liverpool Philharmonic Choir

“Petrenko’s performances with the Royal Liverpool Philharmonic Orchestra, have all the bite, wit and finesse one could hope for.” Financial Times, 28th April 2012

“Petrenko’s hallmark of winning careful but always meaningful articulation from his Liverpool players is as apparent in the outlines of the woodwind and brass uproar at the centre of the early collage as it is in the last Symphony’s skeletal solos…As so often, Petrenko shows the deepest sensitivity in going straight to the heart of the matter, and forward sound-balances for violins and celesta especially serve him well.” BBC Music Magazine, June 2012 *****

“the accepts the symphony’s puzzles and paradoxes, playing down its moments of aggression…and highlighting, instead, its erratic bursts of wonder and its uneasy sense of bewilderment. I don’t mean to suggest that Petrenko is in any way weak-willed. There’s plenty of gravity in the second movement…In the end, though, you’re likely to remember this performance for its moments of disorientation…another splendid release in an exceptional cycle.” International Record Review, June 2012

“The orchestra play with all the refinement, discipline and intense commitment that has characterised this whole series. We hear every detail of the composer’s scores while colours and atmospheres have an incredible range and contrast. From the finesse shown in the shimmering and subdued opening of the Second Symphony to the vigour and excitement elsewhere this is impressive playing.” Chris O’Reilly, Presto Classical, 11th June 2012