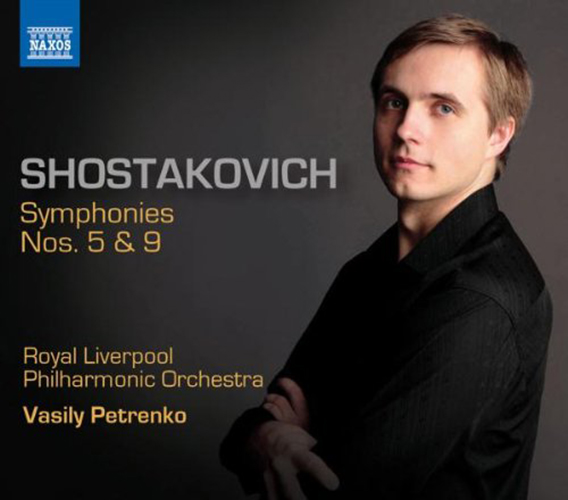 Following their electrifying account of Shostakovich’s Eleventh Symphony (8572082), Vasily Petrenko and the Royal Liverpool Philharmonic Orchestra explore the profound ambivalences of the composer’s most performed symphony, the Fifth, written in 1937 at a time when he was under intense personal and political pressure from the authorities.

The jaunty, neo-classical character of the Ninth Symphony (1945) prompted Shostakovich to remark that ‘musicians will like to play it, and critics will delight in blasting it’.

“Petrenko’s… Fifth is remarkable for the tight discipline and detailed characterisation of musicians plainly on the up. The five-movement Ninth has sufficient energy and muscle to make it more than a mere divertissement. …Petrenko takes his time with the second movement, imparting almost too much aching reflectiveness, notwithstanding the loveliness of the playing. …a whizzing Presto, demonstrating just how far the RLPO’s corporate virtuosity has developed in a relatively short time. The finale puts on a cartoonish burst of speed at its pompous apex. Though you may not like this or that effect, the performance as a whole is deft and undeniably persuasive.” Gramophone Magazine, December 2009

“…Petrenko’s interpretation of the Ninth unleashes the full ferocity of threatening developments and proves that the Moderato, however spare, remains as eloquent a slow movement as any in Shostakovich’s works. Superb playing all round, too, not just from the spotlit bassoon in the crucial recitative but also from first oboe, piccolo and the pairs of subtly phrasing clarinets. In the Fifth Symphony, the principal flautist is representative of Petrenko’s care in making sure every phrase sounds absolutely right for the context…” BBC Music Magazine, December 2009

“…the Liverpool strings aren’t quite as yet a match for the classic Stokowski/Ormandy sound. But they certainly handle every nuance in this detailed score, and in any case Ormandy never peered into the dark corners of this masterpiece in the way that Petrenko does. In Isle of the Dead the obsessive oarsmanship of Charon’s boat, and a tauter, more dramatically contrasted dialogue between cloudlet and rock in the earlier tone poem are spellbinding, too, but the Dances are the thing.” BBC Music Magazine, March 2010 *****

“Choosing a favourite recording of the mighty 5th was not easy, but Vasily Petrenko’s fresh new take eventually swayed me. The second movement, in particular, is as punchy as I’ve ever heard it, while Petrenko’s unusually slow tempo in the coda lends a real sense of majestic triumph. The other work on this disc, the 9th Symphony, is an absolute joy – a humorous, brisk and characterful work that deserves to be better known.” David Smith, Presto Classical, May 2014