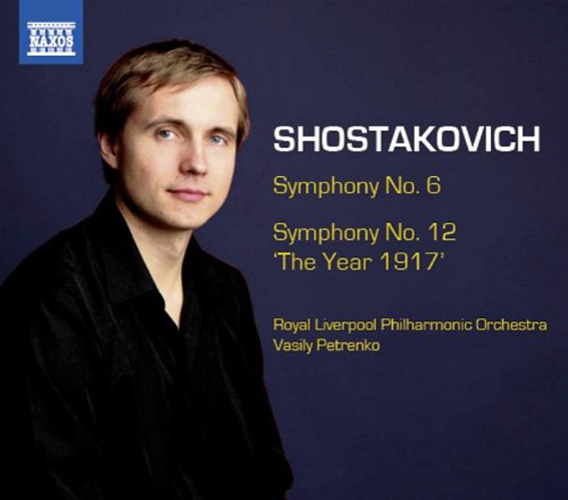 Shostakovich’s Sixth and Twelfth Symphonies both had their origins in large-scale projects about Lenin, though the Sixth was eventually to emerge as one of the composer’s most abstract and idiosyncratic symphonies. The long, intensely lyrical and meditative slow movement that opens the work is one of the composer’s most striking. The Twelfth, one of the least played of Shostakovich’s symphonies in the West, became less a celebration of Lenin’s legacy than a chronological depiction of events during the Bolshevik Revolution. ‘The playing is fabulously crisp and committed, while the interpretations combine atmosphere and a sense of proportion – to the benefit of the youthful First, which receives an eerily effective performance, free of exaggeration.’ (Financial Times on Naxos 8572396 / Symphonies Nos. 1 and 3)

“The RLPO woodwinds excel themselves in these gripping readings.” Sunday Times, 9th October 2011

“Petrenko makes weird and wonderful sense of both…The RLPO’s sense of attack carries all before it, and the eerie Adagio [of No. 12] is traversed with subtlety and finesse. This symphony may not be top-drawer music, but by treating it seriously rather than as the soundtrack for a Bolshevik newsreel, Petrenko and the RLPO do Shostakovich a big favour.” Financial Times, 8th October 2011 ****

“Petrenko leaves his stamp on the performances through his insight into the characteristics of each work…One particularly impressive feature is the fact that Petrenko seems to have instilled such a “Russian” sound into the players…Petrenko’s sense of the music’s structure is sure, both in the Sixth Symphony and in the Twelfth” The Telegraph, 7th October 2011 *****

“[The] fierce, anguished first movement is one of Shostakovich’s greatest achievements; in this superbly paced performance, it seems to echo the wracked Adagio that begins Mahler’s Tenth Symphony. Petrenko and the RLPO are equally impressive in the movements that follow, with wonderfully agile woodwind playing in the Scherzo, and a perfect balance between vulgarity and exuberance in the final Presto.” The Guardian, 20th October 2011 ****

“Superlative standards already set by this team’s Shostakovich couldn’t afford to slip in a symphony as great as the Sixth. In the first movement, at least, Vasily Petrenko and the Liverpudlians reach new heights of articulation and sonic beauty…In the inferior Symphony No. 12, Petrenko applies his usual standards of well-differentiated articulation and soulful playing” BBC Music Magazine, December 2011 *****

“Petrenko makes a case that the Sixth could be amongst Shostakovich’s most elusive puzzling creations…His solution to the Twelfth: stay out of the way, the RLPO’s firepower is good in the telling…profound interpretative insights and stinging orchestral playing.” Classic FM Magazine, December 2011 ****

“[Petrenko]’s not inclined to dwell on the ambiguous political complexities, but his purely musical approach is persuasive. He concentrates on energy and precision, paces each movement astutely, and elicits lean, thrilling timbres from his players.” The Times, 26th November 2011 ****