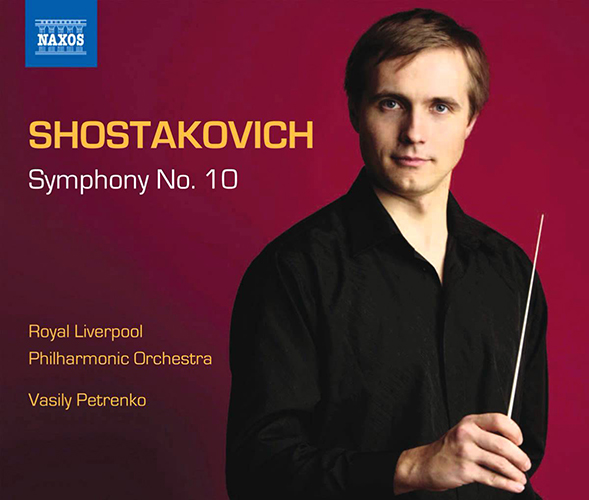 Shostakovich’s monumental Symphony No. 10 ranks among his finest works.

From the bleak introspection of the extended opening movement, through the graphic evocation of violence in the explosive Allegro, and the eerie dance-like Allegretto alternating between dark and light, to the final movement’s dramatic climax, this is a work of breathtaking musical contrasts.

In 2010 Vasily Petrenko was named Male Artist of the Year at the Classical Brit Awards.

“The Tenth is a symphony into which many have been tempted to read parallels with Shostakovich’s life…The refreshing thing is that Petrenko treats it as a great symphony in its own right…All dynamics and metronome marks are scrupulously observed, but details never impede the progress of this rippling, human tragedy.” BBC Music Magazine, December 2010 *****

“Petrenko and the RLPO have achieved a triumph. The orchestral playing is ripe, detailed, lithe, concentrated and intense. Petrenko has full measure not only of the symphony’s overarching architecture but also of the individual facets that make it such a fascinating conundrum.” The Telegraph, 5th November 2010 *****

“Petrenko’s masterly performance builds inexorably from the ruminating brooding of the low strings and lamenting wind solos to the most shattering climax, as the full orchestra erupts in howls of anguish and rage. His whipcrack tempo for the scherzo is one of the most menacing I can recall…A thrilling performance.” Sunday Times, 21st November 2010 ****

“Petrenko’s Shostakovich cycle goes from strength to strength…[his] instinct for pacing enables the power of Shostakovich’s symphonic design to register to maximum effect. If there has been a finer account of the Tenth in recent years, I confess I must have missed it.” Gramophone Magazine, January 2011

“Petrenko shapes the long first movement – nearly 23 minutes – very well, paying close attention to phrasing and emphases…The orchestra plays for all its worth at the climaxes…The ‘Stalin’ Allegro is as brutal as you will find anywhere, and there’s plenty of excitement and wit in the Finale.” Classic FM Magazine, January 2011 ****

“Petrenko and his band show us that the music has greater timbral interest than we often imagine…there’s barely a page of the symphony where we don’t hear some telling orchestral detail…Solo work is subtle throughout, especially in the symphony’s more introverted passages.” International Record Review, December 2010