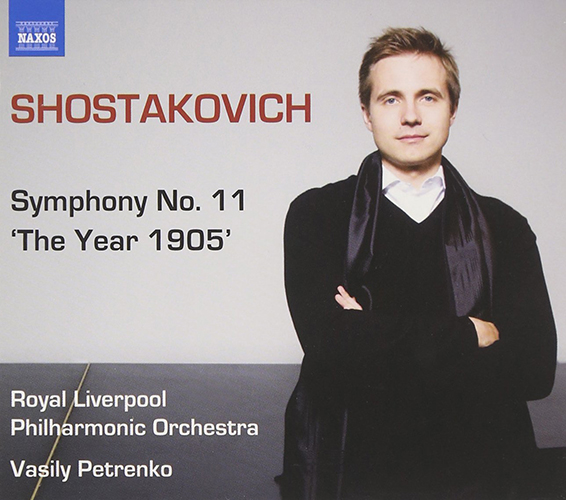 Charismatic young conductor Vasily Petrenko launches his Shostakovich Symphonies series with the Eleventh, a highly charged depiction of the ‘Bloody Sunday’ massacre of over two hundred peaceful demonstrators by Czarist soldiers outside the Winter Palace in St Petersburg in 1905.

The 1905 Symphony is scored for a sizeable orchestra of triple woodwind, four horns, three each of trumpets and trombones, tuba, timpani, percussion, celesta, harps and strings.

The Symphony makes extensive use of revolutionary songs as thematic elements, as it progresses, without pause, from the glacial opening movement, Palace Square, to the terrifying massacre and its aftermath, The Ninth of January, the funereal third movement, Eternal Memory, and the final movement, The Tocsin, which culminates with cataclysmic bell strokes.

“Vasily Petrenko and the RLPO here notch up another commanding success with a dynamic recording of Shostakovich’s Symphony No 11. Petrenko has a clear sense of the music’s ominous, emphatic drama here, but equally the presentiment that emerges from the still emptiness of the opening tableau is palpable, the threnody of the third movement conceived with a genuine sense of the grief and funereal bleakness that the music’s dying phrases so powerfully describe. The RLPO is on top form here, sensitive to the symphony’s darker colours as well as to the warning blasts and aggression of the finale. This is a gripping, visceral performance” The Telegraph, 4th March 2009

“…Petrenko… keeps an extremely tight grip on proceedings, opting for flowing speeds in the first and third movements while carefully building up an exciting symphonic tension through the intense climactic passages that dominate the second and fourth. The Royal Liverpool Philharmonic delivers an incisive and strongly committed performance with splendid and expressive solos from the flute, cor anglais and trumpet…” BBC Music Magazine, May 2009 ****

“…there’s no mistaking the rapid transformation of the RLPO’s corporate profile, no want of character, attack of rhythmic definition.” Gramophone Magazine, May 2009

“It’s too easy to make the whole work sound like an overheated ?lm score, but Petrenko succeeds marvellously in stressing its symphonic credentials. There’s rigour and restraint in his performance, which never takes the easy, ?ashy route when something more musically telling can be chosen instead. The Liverpool orchestra matches that restraint with re?nement. It’s an auspicious beginning.” The Guardian, 27th March 2009 ****

“there’s no doubting [Petrenko’s] iron control, or the orchestra’s multicoloured splendour, from the malevolent glare of sneering brass to the numbed quietude of the strings. This is a recording you have to hear.” The Times, 13th March 2009 ****

“[Petrenko] achieves world-class results with a rejuvenated RLPO in this gripping account…. This outstanding account of a great symphony can hold its head high among recent versions… At Naxos prices, it’s an unbeatable bargain.” Sunday Times

“Vasily Petrenko has galvanised Liverpool musicmaking to such an extent that his contract has already been extended until 2012, with a fair chance that the Rattle/Birmingham phenomenon will be replicated on Merseyside. That said, who made the decision to start the new series with No 11? This is a piece which, viewed variously as a conformist artefact of socialist realism, a coded indictment of Soviet tyranny, ‘a film score without the film’ and/or something more complex, tends to divide the composer’s admirers.

“Mstislav Rostropovich was one of its most individualistic interpreters, extending its playing time to more than 72 minutes in his epic 2002 account (see above). Petrenko has no truck with that kind of self-indulgence, if self-indulgence it be, looking instead to the furious 54-minute precedent of Kyrill Kondrashin in 1973. There’s never any feeling of ploughing dutifully through the notes at this kind of lick, although the Naxos recording is not quite ideal. Timps and bells could be more sympathetically miked and more carefully pitched, while brass and upper strings lack the extraordinary weight of Rostropovich’s LSO. Still, there’s no mistaking the rapid transformation of the RLPO’s corporate profile, no want of character, attack or rhythmic definition.” Gramophone Classical Music Guide, 2010

“The performance here from the RLPO under Petrenko is mightily impressive. I suppose it is one of the quicker recordings on record but it never sounds overly pushed and I would much prefer this approach to the over-indulgent approach you get from some conductors. There is real drama in this music and you hear that in the playing as well, while the slow movement is genuinely grief-stricken and bleak.” Chris O’Reilly, Presto Classical, April 2009