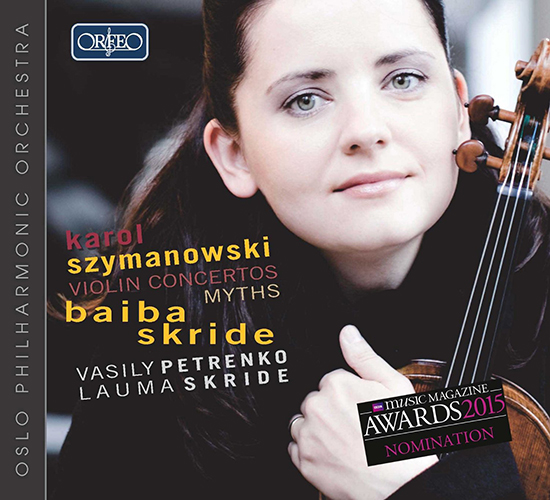 Baiba Skride is almost unparalleled in her virtuosic, idiomatic mastery of the standard repertoire but that is not all, for her concert calendar and discography also repeatedly feature works by lesser-known composers. In September 2013 she played Karol Szymanowski’s First Violin Concerto at the Proms in London; she also recorded the Second Violin Concerto in the studio, along with the duo cycle ‘Myths’ with Lauma Skride at the piano.

“The tone of Skride’s performance is set even before she makes her first appearance, as Vasily Petrenko launches the glinting, nocturnal introduction…When the violinist does enter, the crisply-etched profile of her playing ensures that the performance never lingers, nor is it allowed to be purely decorative. It brings a totally fresh perspective to the work.” The Guardian, 28th August 2014 ****

“Petrenko and Skride are completely as one in defining the tone of both concertos…Skride’s range of timbre, like the astute blend and highlighting of colours that Petrenko draws from the Oslo Philharmonic, is an equally captivating feature of this magnetic performance [of the Second].” The Telegraph, 15th September 2014 *****

“Skride has a vast range of colours in her violin tone and Petrenko provides very detailed accompaniment…For an all-Szymanowski programme, this current one will be hard to equal. Indeed, the artists have set a new standard for the violin concertos…I have reviewed many superb recordings this year, but none finer than this one.” MusicWeb International, 7th November 2014

“Skride easily holds her own in illustrious company, her tone silvery bright, her responses to Vasily Petrenko’s alert (but never spiky) accompaniment quick off the mark. The lyrical aspects of the work – and there are many – are conveyed with a winning sense of poetry.” Gramophone Magazine, November 2014

“The First Concerto’s opening here is vigorous and cleanly etched, with detailed recording…Skride’s performance…is full of tonal variety, and fearless in the often vertiginous tessitura. She and Vasily Petrenko don’t short-change the more dynamic sections though…[in Mythes] the partnership with her sister is a joy.” BBC Music Magazine, Christmas 2014 *****

“[Skride] has control of even the most hair-raising passagework…more impressive still, though, is Skride’s ability to encompass the work’s constantly shifting tones of voice, without ever losing her sense of balance, and without ever letting her tone falter. The music’s calls for portamentos are dextrously handled, and she maintains an enviable tonal purity.” International Record Review, January 2015