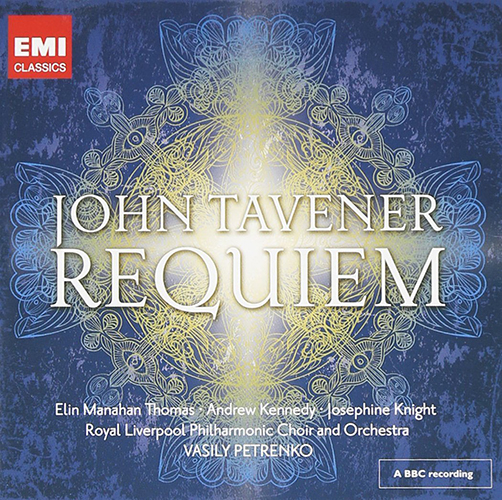 Stephen Johns, Vice President A&R, EMI Classics said, “The live performance of Tavener’s Requiem in the Metropolitan Cathedral in Liverpool was a truly unique occasion, and to experience the extraordinary resonances in that space portraying the composer’s unifying desire behind the work was particularly memorable. We are very pleased to have been able to capture this great work, and also to set it alongside two beautiful pieces for the talented solo string players, Ruth Palmer and Josephine Knight, all supported by the Royal Liverpool Philharmonic Orchestra and their dynamic young conductor, Vasily Petrenko.”

“The crowd that filled every seat of this great concrete wigwam stood and cheered at the end of this performance … I’m not surprised. The news that the 63-year-old composer … was in intensive care after emergency heart surgery obviously invested this concert with tremendous poignancy. But the Requiem, superbly delivered by the Royal Liverpool Philharmonic Orchestra and Choir under Vasily Petrenko’s direction, deserves a standing ovation in its own right. … I found it overwhelmingly touching. ” The Times

“The main piece here is the premiere of Tavener’s Requiem. The last movement is extraordinary: an undulating choral figure is set amidst swells of sound from the orchestra and soloists as the piece builds to a dense climax bringing together Hebrew, Sanskrit, Greek and Arabic texts, with Elin Manahan Thomas’s pellucid soprano above.” BBC Music Magazine, June 2009 ****

“It interweaves the Latin Mass with Islamic and Hindu texts in an ingeniously symmetrical design. There are wonderful moments, like the interlude for solo cello (played by Josephine Knight) and the RLPO’s brass section.” The Telegraph, 10th June 2009 ***

“Written for Liverpool’s Metropolitan Cathedral, and using the building’s spatial possibilities, it has characteristic moments of heavenly ecstasy. Yet the work also shows new fervour and robustness which will surprise those who assume Tavener is stuck in a holy-minimalist rut. The Dies Irae roars ferociously, while the final “Ananda” floats away into the ether. The short, contemplative “Eternal Memory” and “Mahashakti” make fitting companion pieces. Beautifully performed by all.” The Observer, 31st May 2009