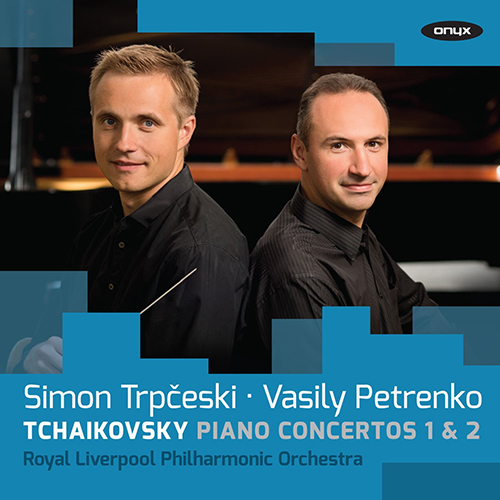 Tchaikovsky’s evergreen First Piano Concerto has long overshadowed the even more virtuosic Second, which is a great shame, as it is every bit as tuneful and rewarding as its famous sibling.

This disc marks the debut on ONYX of Simon Trpceski, the RLPO and Vasily Petrenko. The orchestra and Petrenko will embark on an Elgar cycle for ONYX with Symphony No.1 being released in February 2015.

“The piano part is a strenuous workout for the soloist. Mr Trpceski admirably conquered its myriad technical difficulties, which surpass that of the First Concerto. He played with virtuoso panache in the many bravura passages and with an elegant touch in more introverted moments.” New York Times

“It is not simply that Simon Trpceski has a phenomenal technique. Crucially he has the musical intelligence to know how to apply it and at the same can convey such joy in doing so.” The Daily Telegraph

“[In No. 2] Trpčeski begins like a racehorse out of the starting gate…Still, overall he sounds less impetuous and more poised than Denis Matsuev in his recent recording…Petrenko is always of a mind with his soloist, and shapes some powerful long crescendos, but lets the orchestra veer dangerously close to bombast.” BBC Music Magazine, September 2014 ***

“Trpčeski’s light, silvery touch lightens up so much of a work which, as Matsuev revealed, can become bombastic…Their account of the First Concerto is very fine without sweeping all before it; it’s the Second that should have been the highpoint, and there is not enough of it.” The Guardian, 18th September 2014 ***

“They are best of all in the slow movement, which is delicately phrased and delicately played, with some beautiful piano turns and some gorgeously sensitive orchestral playing too.” MusicWeb International